Cooking up something speedy and satisfying while camping

Chris and I bid summer adieu with an Oregon road trip. 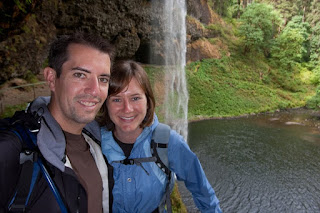 We explored our friendly state to the north for more than a week, and spent about half the nights in a tent. Our camping trips together had been on a smaller scale (overnighters in Tahoe) prior to this trip and required minimal meal planning. Once we booked all our lodging, I got to thinking about some outdoor-friendly menus.

When the Nicolaisen family piled into the minivan for camping trips, my mom kept the five of us fed using a Coleman two-burner stove to make huge batches of spaghetti or other one-pot wonders. We also kept milk, meat, cheese and the like in a large hard-sided cooler, something Chris and I didn’t really want to deal with. We just wanted tasty dinners that would be quick and simple to prepare on the two-burner stove on loan from our friend Bill.

For our first night of camping, at Crater Lake, I made chicken burritos. We’d stayed at a hotel in Ashland the night before and hit the grocery store on our way out of town, picking up some pre-cooked chicken breast strips and a green bell pepper. It didn’t take long to get some sizzle from the sliced pepper and chicken strips, flavored with taco seasoning. The meat and peppers, wrapped up in large flour tortillas with some refried black beans and some hot sauce, added some heat to an otherwise chilly night — lows in the 30s, and even some snow on our way out of the park the next morning!

I also picked up some huge Asiago rolls in Ashland, which added some class to cans of clam chowder. Brands like Progresso and Campbell’s even come with pull-top lids, which is quite convenient if you don’t want to pack a can opener with your camping gear.

Pre-cooked chicken sausages (thanks Portland Whole Foods!), sliced and heated up in a frying pan, tasted great when tossed in with some pre-cooked Trader Joe’s multigrain pilaf, a sassy little combo of grains, soybeans, tomato and onion. This dinner took 10 minutes tops to prep.

Instant oatmeal worked well for breakfast. I’d boil a pot of water, using some for the oatmeal, and would also make what I call poor man’s mochas—combine one packet hot cocoa, one packet Starbucks VIA instant coffee and hot water in a mug and stir. The rest of the hot water was dish water. 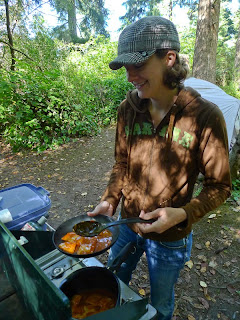 The morning we headed home, Chris and I resurrected a tradition that dates back many years. We had spent a weekend skiing, and opted to sleep in the back of Chris’ 4Runner in the Kirkwood parking lot, ensuring fresh tracks the next day. Our breakfast of champions that morning was Chef Boyardee Ravioli, heated in the can atop a backpacking stove and paired with frosty Newcastles. This time around I emptied the cans into a pot, and nixed the brews, but, silly and/or appalling as it sounds, the breakfast was delicious. I guess almost everything tastes better when you’re camping!
Posted by Loryll at 7:53 PM