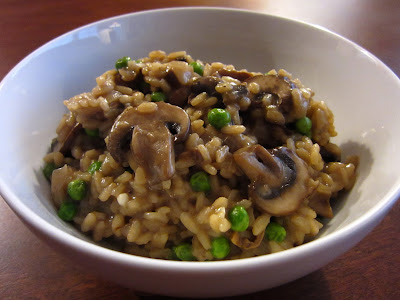 Don’t like mushrooms? What’s wrong with you? Try this dish and you’ll start singing a different ‘shroomy tune.

Put the porcini in a bowl and pour boiling water over them. Soak for about 15-20 minutes, until they’re softened. Use a slotted spoon to transfer porcini to a cutting board and coarsely chop the mushrooms. Reserve the mushroom soaking liquid.

Melt butter in large skillet over medium heat. Add onions and cook until softened, about 5 minutes. Add the rice and stir for 3 or 4 minutes, until lightly toasted. Add wine and cook, stirring constantly, until almost evaporated (this only takes a minute, tops). Reduce heat to low-medium and add porcini, 1 cup broth and the mushroom liquid (leave behind any sediment). Continue adding broth ½ cup at a time and cook, consistently stirring, until rice has absorbed the broth. Stir in sliced creminis after 20 minutes. Cook until the rice is creamy but still al dente, about 25-30 minutes (it’s OK if you don’t use the full amount of broth -- just keep adding broth until you reach a desired consistency). Stir in peas and Parmesan, and season with salt and pepper.
Posted by Loryll at 9:56 PM No comments: 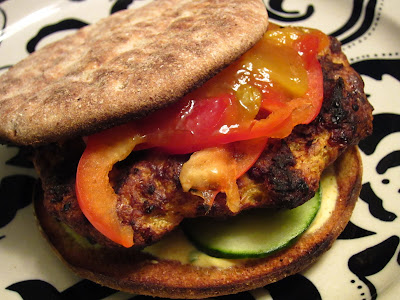 The next time you want a burger but want to go for something a little less conventional than your trusty beef patty with lettuce, tomato and cheese, give these flavor-packed chicken wonders a try.

Whisk yogurt, mayonnaise, green onions and remaining curry powder together to create curried yogurt sauce. Cook burgers 5-7 minutes on each side, until meat is completely cooked through. Serve the burgers on sandwich thins, topping each patty with two tablespoons of chutney, a healthy spoonful of the curried yogurt sauce, and sliced bell pepper and cucumber.
Posted by Loryll at 6:00 AM No comments: