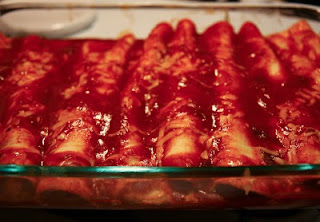 I can’t roll an enchilada to save my life.
No matter what I do, I can’t seem to keep corn tortillas from splitting at some point in the rolling process. This results in lots of enchilada casserole for dinner, which still tastes great but it just doesn’t look as cool.

I subbed flour tortillas for the corn ones with my most recent batch of enchiladas. I recall one of my college roommates making some pretty solid enchiladas with flour tortillas, so why not give it a try for myself? I had much better luck rolling the flour tortillas. I couldn’t find small flour tortillas when I hit the store, and eight medium tortillas were all I needed to fill a 9-by-13 baking dish.

Everybody has a go-to cheese for their enchiladas, and I normally like to use either medium cheddar or Monterey jack. We recently found some chipotle cheddar at Winco, which added a nice flavor to this batch.

These enchiladas took less than an hour to make. Obviously nothing tops fresh, homemade ingredients, but there’s no shame in utilizing shortcuts, especially on weeknights!
I try to keep a bag of cooked shrimp in the freezer, as well as a bag of corn kernels. With that in mind, I’ve written the recipe from the point that all frozen ingredients have been thawed. I also use pre-made enchilada sauce.