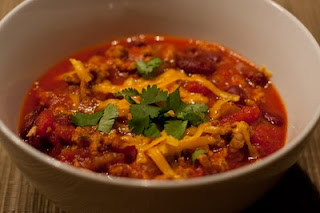 I’ve been playing with this chili recipe for some time. I originally tried it because I wanted one of my first forays into making chili to be an easy one. Sure, it was easy, but working with chipotle chiles in adobo was a completely new experience, and it left everyone at the table in tears.

Since then I’ve worked with each batch, trying not to not go overboard with the chipotle, as these little guys pack a slow burn of a punch. The recipe I started with calls for a tablespoon of adobo sauce, and I like to split that up into three teaspoons — the first two go into the pot early, and the third is optional, depending on how things taste once everything’s had a few minutes to simmer.

Even if you take it slow, this recipe takes less than an hour from start to finish.

Heat olive oil in skillet or other large frying pan over medium-high heat. I omit olive oil when using a non-stick pan. Add onion, garlic, salt, chili powder and oregano and cook, stirring often, for roughly 3 minutes. Stir in tomato paste and the chipotle chile and 1 teaspoon adobo sauce, cooking for a minute more. Add turkey, breaking it up with your spoon or spatula, and cook until meat is no longer pink. Stir in beer and simmer for about 10 minutes. Add tomatoes — crush them with your hands over the skillet — it’s just as messy as chopping the tomatoes beforehand, but at least you won’t have to wash a cutting board! Also add tomato juice, kidney beans and another teaspoon adobo sauce. Bring to a boil and cook until thick, about 10 minutes. Taste for heat, and, if you want more spice, stir in that third teaspoon of adobo. Serve in bowls and garnish with cilantro, grated cheddar and tortilla chips.
Posted by Loryll at 8:59 PM