Doing a little jig for bangers and mash 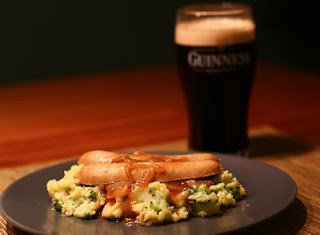 St. Patrick’s Day is a fun one to celebrate, but I’m not the biggest fan of corned beef. Actually, it turns my stomach, to be quite honest.

So, for the sake of being festive, if not completely culturally accurate, I picked up some British-style bangers to make bangers and mash. The green potatoes and the Guinness gravy were my homage to the Emerald Isle, and everything tasted great paired with a Smithwick’s Irish Ale.

Melt butter in large saucepan over medium heat. Add onions, stirring constantly, until softened, 5-10 minutes. Use fork to poke holes in bangers and add sausages, broth and Guinness to pan. Allow to cook, covered, over medium heat for a minimum of 10 minutes, at least long enough for the bangers to heat all the way through. Once bangers have simmered to your satisfaction, remove them from pan and place on a plate. In small bowl, whisk together cornstarch and water to create slurry, which you’ll stir into onion sauce to thicken. Serve bangers with Green Potato Mash, applying gravy to bangers, mash or both.

Bring potatoes to boil and cook until soft. When potatoes are close to done, heat milk in saucepan with butter over medium heat until butter melts. Remove from heat. Drain potatoes in colander and transfer to large bowl. Add broccoli, grated cheese and milk mixture and coarsely mash with a potato masher. Season with salt and pepper, and serve.
Posted by Loryll at 9:11 PM