A soup with plenty of spuds and spice 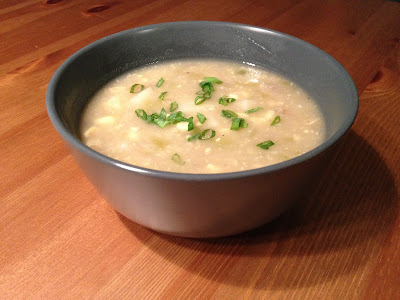 We’re not big potato eaters but every once in awhile I’ll spot a ginormous bag of spuds at the grocery store, see that it costs mere pennies, and before you know it I’ve hoisted a bag into my cart.

This is what happened during my most recent trip to the supermarket, when I spent a whopping $2 on 10 pounds of white potatoes (this soup was the result of my last cheap-as-dirt potato deal). I also picked up some end-of-season corn for 25 cents per ear.

It’s finally cooling down and feeling like fall, and these super-cheap ingredients were the basis of one of the first of many soups and stews I plan to make in the coming months. I like the sweet flavors of the corn and the cooked red onion mixed with a little bit of kick from the jalapeno, diced green chiles and cumin.

Warm oil in a large heavy pot. Add jalapenos, red onion, garlic and cumin and cook mixture, stirring occasionally, for just a couple minutes. Add potatoes, corn and broth to pot, cover pot and bring to boil over high heat. Reduce heat and simmer for 30 minutes, or until potatoes are tender. Use two-cup glass measuring cup to scoop six cups of soup into blender. Puree soup mixture and pour back into the pot. Stir in the green chiles and simmer for just a couple more minutes. Season with salt and pepper.
Posted by Loryll at 9:45 PM