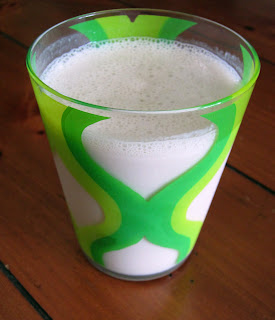 Summer’s finally here in all its sticky, steamy glory. Pretty soon it’s going to be too hot to eat anything other than ice, but after a too-long, too-gray spring I’m applying plenty of sunscreen and telling Mother Nature to bring it on.

A piping hot coffee just isn’t how I want to start my morning when it’s necessary to fire up the AC as before I’ve even put in my contact lenses. I’m thinking about the next couple months, in all their sweltering glory, and think it’s time to give the Vitamix blender some love. This is the first installment of a weekly feature I’ll call the Summer of Smoothies. Not quite as ambitious as May’s 31 Days of Salad, but a delicious challenge all the same.

A quick note on portions — when I make a smoothie, it’s gotta be something to last through the morning. What I throw into the blender typically fills a pint glass with a little refresher left over.

First up is a little wonder I’ll call the Banana Blast. My first thought was to call it a Chunky Monkey, but this smoothie is quite smooth and therefore the opposite of chunky. I could have called it the Funky Monkey, but “funky” is near the top of the Words Loryll Absolutely Detests list (other words on the list include “diva” and “tennies” when used to describe footwear). Enough about that though. On to the good stuff!

Combine all ingredients in a blender. Blend until smooth.
Posted by Loryll at 8:32 PM