As previously mentioned on this blog, I signed up for the pie contest at work, entering not just one, but two, different desserts.
I decided to make a chocolate almond pie and a caramel apple pie. Both seemed like doable desserts, even though I’ve never baked a pie in my life. Silly girl.

Although I was most worried about the crust, both my Nana Dollie’s 7-Up crust and a chocolate-graham-cracker base worked out great. What failed me in the end were the fillings. 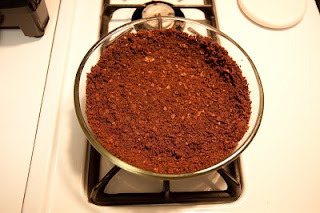 The caramel, while fun to make, had a too-tough consistency that didn’t really mesh with the Golden Delicious slices my recipe called for, and didn’t really melt while baking. What came out of the oven, while ringed with gorgeous, flaky crust, was quite a soupy apple mess.

I tricked myself into believing the pie needed to set a little longer and loaded it into the trunk of my car, in what I thought was a tightly sealed and secured manner. That might have worked if I drove a straight line for 40 miles, but the turns and stops were too much, and I got to work and discovered the pie had tossed its cookies all over my trunk— caramel juice everywhere. Damn.

Even though the apples still looked good, and the crust would have tasted fine, it would have been a joke to serve this up to the judges.

Good thing I still had my chocolate almond pie, or so I though. I had fun making the filling, a mix of egg yolks, tons of chocolate, cream and both vanilla and almond extracts. It seemed pretty firm even to the point when I took it out of the fridge at work and sprinkled the edges with sliced almonds. For whatever reason, this pie filling softened up really fast, too fast to be taken seriously among my competitors’ creations. 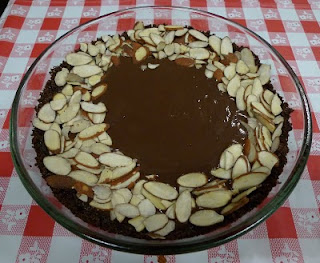 Although neither of my pies won — that cash prize would have been pretty sweet — and I was bummed for about 5 minutes, I can laugh about it now, and know where to focus my efforts the next time I attempt to bake a pie.
Posted by Loryll at 7:57 PM