Passing on pork, but pausing at turkey ham 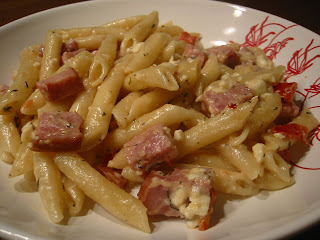 Since my high school days, pork has been on my bad side — too much Easter ham, or maybe too many too-chewy strips of bacon?
There’s nothing religious or ethical about this decision to keep pork out off my plate, and I definitely make exceptions for what could be considered the nastier side of the other white meat, because really, country gravy just isn’t the same without some serious sausage.

Laugh all you want — I still won’t try that pork chop.

I have purchased my fair share of turkey bacon, and love cooking with Italian turkey sausage. My most recent pretend-it’s-pork experiment comes in the form of turkey ham.
I had a coupon and decided to give it a go. The turkey ham wasn’t too spendy — $4 for a two-pound hunk—and lean, with 3 grams of fat per two ounces of meat.

This poultry-meets-pig cubed up nicely and added a great smoky, meaty touch to this Bon Appetit baked pasta recipe, which I also spiced up with a tablespoon of red pepper flakes.

Next morning, I chopped up some more ham and made a sort of Denver omelette with diced green bell pepper, mushrooms and chives.

I’ve still got enough meat in the fridge for another recipe. Any suggestions?
Posted by Loryll at 10:10 PM