For the past couple years Chris and I have avoided going out for Valentine’s Day, opting instead to stay home and prepare a stellar meal for a fraction of the price. For example, last year's dinner featured some awesome steaks, scalloped potatoes with truffle cheese and spicy asparagus.

This year I wanted to go out on a limb a little and work with lamb. My experience cooking lamb to this point had been limited to grilling up some burgers. I still dream of the delicious leg of lamb I had for my birthday this year at Barndiva in Healdsburg, and used that amazing meal as inspiration for our Valentine’s feast.

I pulled out all my cookbooks, spread them around me and got to work. After reading about the different cuts and cooking methods I honed in on roast leg of lamb. Alice Waters’ “In the Green Kitchen” and Jamie Oliver’s “The Naked Chef” were great resources. 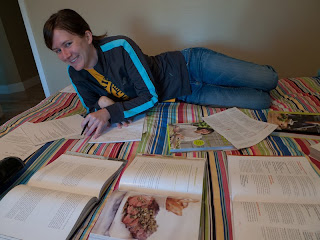 The meat department at Corti Bros. had whole, bone-in legs that weighed over seven pounds, which would have been a bit much for the two of us. The butcher removed the bone and gave me the top half of the leg, which ended up weighing a little over three pounds. Perfect.

I brought in two enormous sprigs of rosemary from the backyard and sliced up three large garlic cloves. All the garlic cloves went in the inside of the leg, along with about half of the rosemary, before I tied the leg up into a nice, tight bundle using kitchen string. I seasoned the outside of the leg with plenty of salt and pepper and set it atop the rest of the rosemary sprigs in a large roasting pan. I roasted the lamb in the oven at 375 degrees for 30 minutes before flipping the lamb, roasting an additional 30 minutes, and then flipping it over again for another 20 minutes or so. Once the lamb’s internal temperature was 128 degrees, I removed it from the oven and let it sit for another 15 minutes before carving. What I ended up with was a medium-rare marvel that tasted great on its own, but even better with some mint pesto. 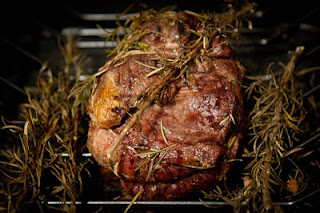 Combine all ingredients but oil in blender or food processor to course puree. With machine still running, gradually pour in olive oil. And puree until almost smooth. Season with salt and pepper. 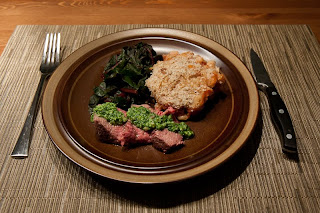 Sautéed chard (tossed into a frying pan with a little bit of soy sauce and red pepper flakes) and a white bean gratin rounded out the meal. I know there are some shortcuts I could have taken with the beans, but my experience with dry beans is minimal so I wanted to start this dish from the very beginning.

While I spent a good part of the day in the kitchen, it was well worth it to enjoy a delicious meal with my sweets.

Rinse beans and place in a large bowl or pot. Fill pot with enough water to cover beans with 1-2 inches water. Soak overnight, and then drain.

Transfer beans to a 13-9-2-inch glass baking dish. Add canned tomatoes and thyme and stir together gently to blend. Season with salt and pepper to taste.

Mix breadcrumbs and Parmesan in a bowl and sprinkle over beans. Bake at 350 degrees roughly one hour, until topping is a golden brown and mixture is bubbly.
Posted by Loryll at 9:35 PM