Out of all the wonderful gifts I received this holiday season, one of my favorites is a lovely Le Creuset Dutch oven.

This is some serious kitchen hardware. We’re talking about 7 ¼ quarts of enameled cast-iron wonder. The sky’s the limit as far as what I can cook in this ocean-colored beauty. 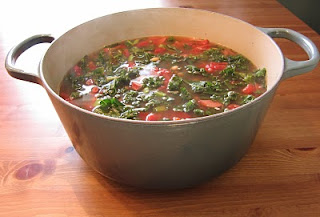 I’ve been scouring my cookbooks and the Internet for recipes, but before I get to braising all kinds of other delicious fun I thought I’d ease into it and get to know the Le Creuset by making a big hearty pot of soup. 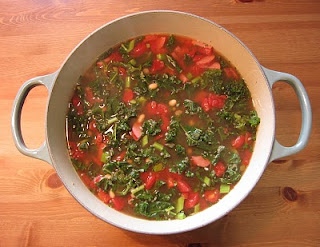 Cook sausage over medium heat in Dutch oven for a couple minutes, until hot. Remove from pot and place in bowl. Warm olive oil in pot and add garlic, cooking for a minute or two and stirring occasionally, until aromatic.
Add broth, tomatoes, Creole seasoning, minced onions, beans, rosemary and oregano. Cover and let cook for at least 30 minutes.
Stir in kale and sausage. Cover and cook for about 10 minutes, until kale is soft. Remove rosemary and oregano before serving soup.
Posted by Loryll at 9:32 PM