In a casserole kind of mood? 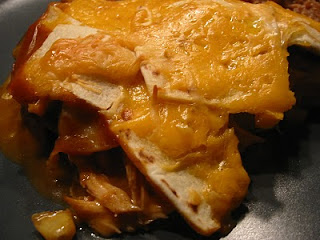 I felt the need to fire up my Crock-Pot a while back and went hunting for recipes. The good folks at Campbell’s captured my attention with a dish that called for slow-cooked chicken breasts, shredded and baked with tortillas and tons of cheese.

In this case, I don’t think the slow cooking was necessary. You can probably get the same results, but faster, by either baking the chicken breasts or using leftovers. I tweaked the recipe by scaling back the cheese, using enchilada sauce (they called for taco seasoning) and adding corn and olives. Try this dish the next time you’re craving a gooey casserole.

Place the chicken into a 3 1/2-quart slow cooker. Top with ½ cup enchilada sauce and 3 ½ cups of the broth. Cover and cook on low for 4-5 hours or until the chicken is cooked through. Remove and shred the chicken — a fork and knife will work for this.

Heat oven to 350 degrees. Combine remaining broth and enchilada sauce with condensed soup, corn and olives in saucepan. Cook at medium heat until everything is warm and stir in chicken.
Layer half of the chicken mixture with tortillas and cheese in a 9-by-13 glass dish. Repeat the layer and bake for 30 minutes, until everything is hot and bubbly.
Posted by Loryll at 5:06 PM