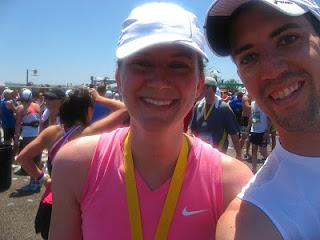 Chris and I spent the weekend down in San Diego, where we both ran the Rock ‘n’ Roll Marathon. And while it might have felt like it, especially around mile 25, we didn’t spend the entire time running. There was a lot of relaxing, as well as a lot of eating, both before and after Sunday’s race.

Here’s a rundown of some of the places we tried.

Rama Thai
We spent Friday and Saturday ingesting some serious carbs, while keeping meat, spicy dishes and dairy at a minimum. Friday night we feasted on Rama Thai’s Pad Thai with chicken, Drunken Noodles with beef, and the Birds Nest, a brothy dish with crispy noodles, shrimp, chicken, bamboo shoots and fresh vegetables.

Bencotto Italian Kitchen
I stumbled upon this newer Little Italy eatery via Yelp. For our last big pre-race meal Chris and I both opted for pasta bowls. Bencotto offers Pasta a Modo Tuo (pasta your way), allowing diners to pick between nine sauce choices and eight pastas, which are all made daily in house. While I thoroughly enjoyed my salsiccia (sausage in spicy tomato sauce) atop pappardelle (large hand-cut fettuccine), Bencotto’s menu featured many other tempting dishes I would have loved to try if I wasn’t uber-paranoid about my stomach. 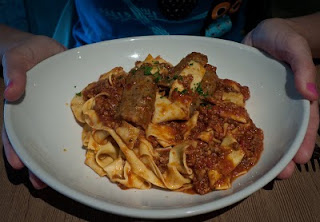 Karl Strauss Brewing Company
Our post-race binge-fest took place at Karl Strauss’ downtown location. We tried the beer sampler and both honed in on the Pintail Pale Ale. Chris went for the chipotle-marinated flat iron steak, and I refueled with their Turkey Bleus Burger, a turkey burger with gorgonzola and pesto mayonnaise, with a side of some deliciously stinky garlic Parmesan fries. 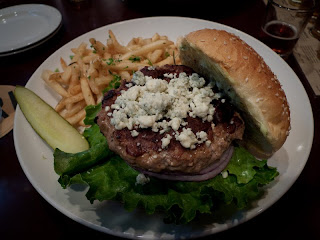 El Vitral
A couple hours later we were ready to do some more eating, and enjoyed a light dinner of tacos at El Vitral, right next to PETCO Park, home of the Padres. Two taco plates did the trick — the Camaron Enchilados, made with spicy shrimp and mushrooms and topped with avocado cream, and the Taco de Dorado (beer-battered mahi mahi with slaw, salsa verde, crema fresca and chipotle aioli) were gone in no time. 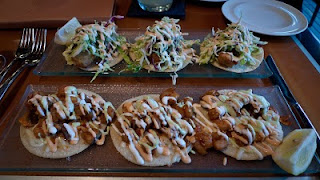 Broken Yolk Café
Monday morning we hobbled down the street to the Broken Yolk Café for breakfast, where I indulged in Betty’s Southern Biscuits and Gravy and eggs over medium. We each ordered a mimosa and learned that we could get a full bottle of champagne for the price of those two drinks, and soon after a chilled bottle of bubbly and mini carafes of orange and pomegranate juices ended up at our table. Definitely helped ease the sore legs a bit!
Posted by Loryll at 9:07 PM