Trimming the fat with turkey stroganoff 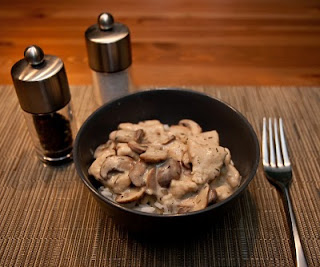 Here’s another recipe inspired by “On Rice,” the cookbook I mentioned in my previous post.
I took the author’s cream sauce recipe and lightened it up, swapping out heavy cream for milk and fat-free sour cream, which I think gave the meal a tangy, sort-of-stroganoff kind of taste. Something I might try the next time around is using only half a cup of wine, and adding ½ cup chicken broth.

Combine flour, ¼ teaspoon salt and ¼ teaspoon pepper in medium bowl. Toss turkey in the flour, shaking off excess. Heat oil over medium heat in a large nonstick skillet. Add turkey to the skillet and cook, stirring occasionally, until the meat is lightly browned, about 5 or 6 minutes. Transfer turkey to a plate; set aside.

Melt butter in skillet. Add shallots, cooking and stirring often until softened, about 1 minute. Add mushrooms, lemon juice and thyme, stirring well. Cover and cook until mushrooms give off their juices, about 3 minutes. Uncover, increase heat to high and cook an additional 2-3 minutes, until mushroom liquid evaporates.

Pour wine into skillet and boil for a couple minutes. Add milk and cook for 7-8 minutes, until liquid has reduced slightly. Bring heat back to medium and stir in sour cream. Return turkey to the skillet and cook until sauce is slightly thickened, just a minute or two. Season with salt and pepper, and serve over steamed rice.
Posted by Loryll at 10:00 PM