There's nothing scary about cooking with crab 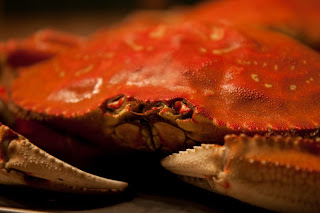 I don’t know why I find seafood so intimidating.
It might have something to do with an upbringing heavy on the fish sticks and not much else in the under-the-sea department. I didn’t try lobster until after high school, thought sushi was disgusting until age 21 and didn’t have my first mussels until after college.

I’ve spent the past few years making up for lost time in a sense, and have challenged myself to not only eat different fish, but to learn how to prepare it at home. I even have a fish guy — I’m on the Little Fish Company’s weekly e-mail list, and enjoy picking up my orders from the Sunday morning farmers market in Sacramento.

I’ve tackled scallops, salmon, mahi mahi, albacore and halibut cheeks (absolutely delicious), but it wasn’t until this past weekend that I came home from the market with a bag full of Dungeness crab.

Two of these mean-looking sea creatures, each weighing at least two pounds, yielded enough meat for two meals. They were already cooked, but Chris and I still had to tear them apart and remove the meat. Quite the messy experience, but not a big deal.
Sunday night’s dinner was simple, I just sautéed some of the meat with a pat of butter and some garlic salt, and served it with some herb-and-butter pasta.

Monday night I crafted a flavorful chowder using the rest of the crab meat, diced potatoes, corn and some fantastic two-year sharp aged cheddar from Renard’s Cheese, straight out of Door County, Wisconsin. My attempt at crab chowder had some heat to it thanks to the cayenne, but I think it complemented the sweet flavors of the corn and the crab meat, and the cheese and potatoes gave it a good stick-to-the-ribs factor. 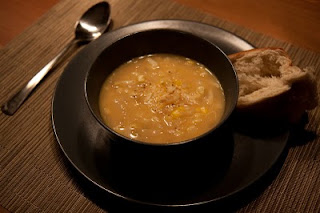 Sautee onions over medium heat in a large pot for a couple minutes, stirring frequently, until onions are soft. Add broth and potatoes to pot and bring to a boil. Continue to boil potatoes until cooked — it took about 10 minutes for me to get them to a point where they were cooked, but not mushy. Turn heat to low, and stir in milk, cayenne, crab meat and corn. Allow soup to simmer for a few minutes. Add grated cheese and stir until the cheese has melted into the soup. Remove from heat and serve.
Posted by Loryll at 9:00 PM